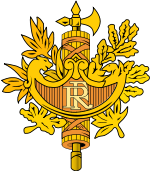 The French Civil Service (French: fonction publique française ) is the set of civil servants (fonctionnaires) working for the French government.About half of the civil servants are employed in the French public education system. Most employment positions in the French civil service are open to citizens of the European Union. Others, especially in police and justice, are specifically reserved for nationals, while a minority are open regardless of citizenship. The civil service of the State (fonction publique de l'État, may technically, also refer to fonction publique militaire, the personnel of military status. They are generally counted apart.
Organizational Structure: Civil servants of the State are divided into corps (administration), which may themselves be divided into ranks (grades) (called classes in certain corps). Corps are grouped in 3 categories (formerly 4) named A to C, in decreasing order of educational knowledge theoretically required, A meaning "college graduate". Certain corps enjoying particular prestige are called "the great corps of the State" such as the Great administrative corps of the State, generally recruited through the École Nationale d'Administration.
High-level administrative positions are typically paid much less than the equivalent positions in private industries. However, members of great Corps often practice pantouflage — that is, they take temporarily (and sometimes permanent) leaves from government work and go work in industry. Members of the great administrative corps are well represented in politics. This is facilitated by civil servants (of any level) being able to exercise elected office on a temporary leave (détachement) from government.
The general rule is that civil servants are recruited through competitive exams. High level nominations are made by the President of the Republic in the council of ministers. The rest are by the head of the agency they belong to, or by a minister; in fact, they are in general appointed by some person who has received from the head of agency or minister the authority to do so.